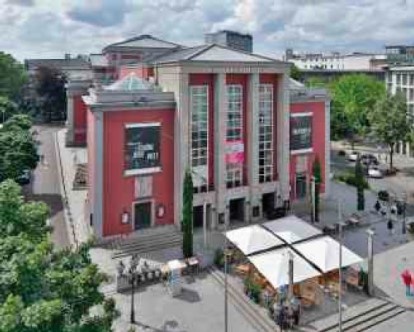 WESTWIND 2014 will take place in Essen from 12 - 5 until 18 - 5. 2014 the festival will be artistically directed and organised by Schauspiel Essen.

WESTWIND 2014 is supported from the state of North Rhine-Westphalia and the City of Essen. Patron of WESTWIND 2014 is the mayor of the City of Essen, Reinhard Paß. WESTWIND every year presents the ten most extraordinary plays of children's and youth theatre in North Rhine-Westphalia, chosen by a professional jury. In 2014, the jury will consist of Kolja Burgschuld, Ulrike Gondorf and Frank Röpke

WESTWIND sees itself as a work meeting of the theatres of North Rhine-Westphalia. The structure of the festival is unique: Every year, local theatres meet up in a different city with state and privat theatres, independent theatres as well as independent groups and single persons. There are performances open to the public as well as academic talks on the performances of the competition, lectures, discussions and workshops dealing with different aspects of children's and youth theatre Furthermore extraordinary international productions which are out of competition and international guests will be invited. Especially due to the support of the art foundation North Rhine-Westphalia, Westwind is able to enlarge its international framework programme in 2014.

"Next Generation", a programme launched in 2009, the WESTWIND festival also is a future-orientated workshop for young artists. From a large number of applicants we will choose ten that will receive a scholarship. A mentor will guide the participants who have received a scholarship through the week of the festival.

Last but not least there will be educational offers along to the performances for kindergarten and school classes. At the end of the festival a jury will award the winner with 10,000 Euro provided by the state of North Rhine-Westphalia